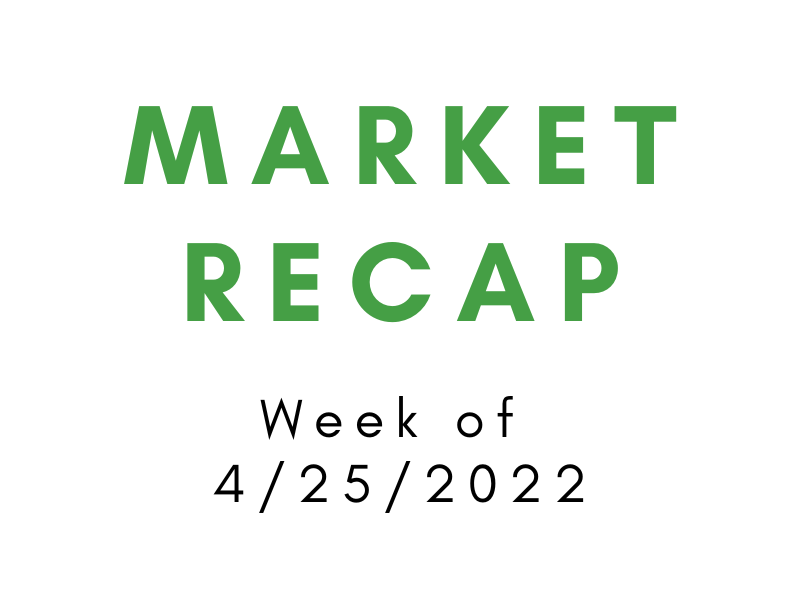 The past week summarized in three short headlines.

The market was rough yet again for investors, as this week marked the fourth straight decline of the major U.S. indexes. With the Dow Jones down 2% and S&P 500 down around 2.9%, the NASDAQ trailed for another consecutive week with a loss of around 4%. The tech-heavy index is now down over 23% since November.

In this year’s first quarter, the GDP and economy of the US regressed, surprising economists and worrying investors. After posting a full-year growth of 5.4% last year, the drop of 1.4% in the first quarter is something economists believe is a temporary setback. The unfortunate news for investors is piling on this week like APs and finals for students.

Yield rates have surged to 2.9% as bond prices increase and people pull money out of the market. Though the forecasted interest rate hike harms investors’ wallets, it’ll be slightly set off by the strengthening of the US Dollar. The policy tightening of the Fed Reserve has bolstered the status of the dollar in the world economy.

Elon Musk — a visionary, leader, and genius that doesn’t need an introduction — just bought Twitter for $54.20 a share, or $44 billion. Around 10 days ago, Elon Musk made a bold announcement that he planned on purchasing the social media company on which he frequently posts.

In response to this surprising request, Twitter implemented a poison pill plan. Essentially, this defense mechanism meant that if Musk bought the stock, his shares would immediately go down in value by a significant amount, losing him a serious amount of money. However, after a week of negotiations between Musk and the Twitter Board, Twitter ran out of options.

With no other options on the table, Twitter was forced to accept his offer. Musk is supposedly a champion of free speech and preventing bots from clouding Twitter. Normally a deal like this wouldn’t happen so rapidly, but Twitter’s lack of offers and Musk’s impressive net worth expedited the deal and helped it close so quickly.

It’s no secret the Federal Reserve wants to slow down inflation, and they pulled a new trick out of their sleeves: the I-Bond. The I-Bond is a type of Treasury security that was made to “protect America’s money from rising inflation.” The government will now issue them at a historically high 9.62%, an interest rate that will surely attract new investors. Parking your money in these types of bonds is very attractive to some investors with higher inflation, leading to more money being taken out of the market.

This will slow economic growth but also stunt inflation, the goal of the Fed Reserve at the moment. The risk of defaulting on these bonds is practically zero, leading many investors to place their money in these bonds in such a time of uncertainty. The NASDAQ is down 23% from its record highs, in clear correction territory, and these bonds have never looked better.

The market fell for another straight week with the NASDAQ now firmly in correction territory from its highs. All over the news was Elon Musk buying Twitter. However, a poison pill was in his way as Twitter refused the sale. The Federal Reserve raised the interest rates on its I-Bonds to further stop the growth of inflation.