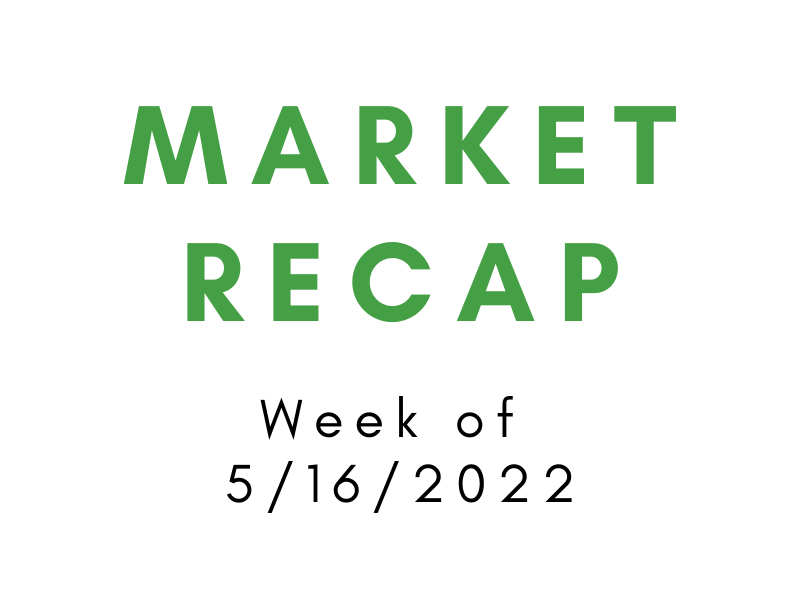 At camping sites, they always tell you not to leave any food around to avoid attracting bears. If the US stock market was a campsite, it has left all types of treats around for bears to prey on. After another week of losses, between 3-4% for all major US indexes, the market comes closer and closer to a bear market.

The S&P 500 touched a 20% loss from its highs in January this year but managed to stay out of bear territory for this trading week. Many investors fear an economic recession is on the way as inflation has been cutting into profits for even the largest and most stable companies.

Bond prices continue to stay extremely high at 2.8% on the week, a far cry from the 1.5% average of last year. This signifies investors are losing trust in the market and pulling their money out for even safer investments, i.e. cash. Even with inflation, the US dollar has continued to rise in value, now almost matching the value of the Euro. Parity, as it’s called, is when two currencies are equal in value.

As of now, a single Euro is worth a US dollar and a nickel. Since the creation of the Euro, the last time a parity occurred between the two currencies was in 2002. Metrics of inflation and how the Federal Reserve plans on acting will be released on Wednesday when the minutes of the Fed’s May meeting will be released. Investors from around the country will be frantically awaiting the news and stricter monetary policy might be enacted.

Investors are in a dilemma right now, as the descending market and rising inflation are forcing them to make a difficult decision. Should investors buy the dip or sell and move on? It’s a problematic decision especially considering the uncertainty of the Federal Reserve. With consumer spending changes as the price of goods increases, and inflation causing a possible recession, the Federal Reserve might increase rates and hurt market growth.

Timing the market is an even bigger problem as its recent, volatile nature has given investors cold feet. Warren Buffet once said “time in the market beats timing the market” but it’s hard to invest money as you see waves of red in your portfolio. Without a clear bottom established, the market is liable to a panic sell-off caused by a series of losses followed by massive dumping of stocks.

Inflation increases all the time, but when there’s a real underlying problem causing the increase that’s not resolved, hyperinflation occurs. Hyperinflation is rapid inflation where the value of the currency decreases exponentially. In stable economies, this type of quick devaluation is unheard of, but in countries like Germany after WWI, it is a possibility.

After WWI, the German government, known as the Weimar Republic, was in significant debt, and to pay it off, they made a rash decision. They decided to just print more money, essentially reducing the value of the German mark every time a bill rolled off the printer.

There was a story of a man that bought a coffee for 5,000 marks and then decided to buy another drink. In the ten minutes he was sipping on his hot drink, the coffee’s price rose to 14,000 marks. The menus couldn’t be updated fast enough to account for the rapidly decreasing value of the mark. Soon, the dollar-to-mark ratio was 1 to a trillion.

Wheelbarrows of money were wheeled around and the money inside still wasn’t enough for necessities like bread and normal consumer items like newspapers. For investors of the present, there’s no need to worry about this worst-case scenario. The very purpose of the Federal Reserve is to prevent monetary disasters on this scale like this from occurring, though inflation currently is greater than historical averages.

The market continues to drop as inflation increases and investors get more and more worried. With a possible recession in the future, investors are in a tough spot as deciding between buying the dip or selling is a tough one. Though inflation is increasing, the worst-case scenario of hyperinflation won’t occur.