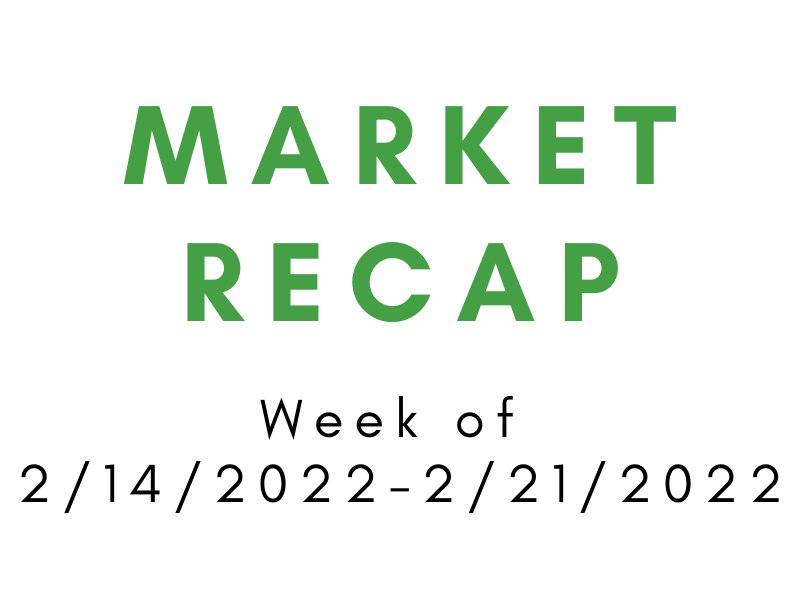 If the post-Covid recovery of the market was like Steph Curry’s shooting, the start of the New Year would resemble Curry’s dismal performance after breaking the 3pt-record. Stuck in a slump, for the second week in a row, the market appeared like it would be making gains in the middle of the week. However, the market turned for the worse, and indices fell around 2% on the week, mostly driven by Russia-Ukraine tensions.

The oil rally, which saw prices of oil reach $95, stalled as the broader market’s rally did. To close the week, the price per barrel was just over $92 a unit. Though oil went down, gold rose this week as geopolitical tensions compromise supply chains and make the commodity more valuable.

In other economic reports, unemployment rates increased this week after steadily declining for the past four weeks. Overall growth also slowed down after being stable for a few months. Yield rates exploded to over 2%, the highest it’s been since July 2019. When yield rates rise, it typically implies a more risky environment. Last December, to give a comparison, the yield rates were only 1.4%. Investors may dislike the high yields, but they enjoyed the great earnings performance of the market as earnings increased by 30.9%.

The following week, ending on February 25th, ended up mostly positive despite Russia invading Ukraine and many sanctions being placed on the Russian economy. High inflation still persists during this time, as consumer prices were shown to still be inflated this last month. The price of oil just barely touched $100 a barrel, the first time the threshold had been breached since 2014. 2014 was when the Ebola outbreak occurred — it’s been that long since oil was this high! Volatility in US and global markets spiked, as Russian indexes went down 33% in one day and then recovered 19% the next.

If you haven’t already heard from every other news source, Russia invaded Ukraine, and serious geopolitical ramifications have ensued. War, obviously, makes many investors more fearful, so many investors run to economic safe havens.

In the forex market, the Euro-Swiss currency trade is seen as a marking of geopolitical tension as Swiss currency is seen as a haven during times of turmoil. It’s the highest it’s been since 2015. Another shelter of money in times of unrest, gold, is also hanging onto 13-month highs.

30% of Europe’s oil comes straight from Moscow, showing a significant reliance on Russia, a country likely to be hit with a mountain of sanctions. This supply chain break might increase the price of oil significantly, with some investors speculating it could rocket over $100 a barrel.

The brunt of the financial risk is also concentrated in Europe as many European oil companies have subsidiaries in Russia which would be put at economic risk by the sanctions. However, a conflict like this affects the whole world. For example, this past Thursday, when President Biden stated that Russia was extremely close to invading Ukraine, the markets tanked.

3. Investing in a Crisis

In a time of crisis, whether that be a recession, a global issue, or something affecting your country, strategic investing is key. In blackjack, players that lose money sometimes double their bets to try to make it all back in one round. This usually results in disappointment and the magnitude of the loss being increased.

Similarly, in times of crisis, inventors tend to act on emotion and impulse, leading to rash decisions that often leave them worse off. If a market dip does happen, for several reasons, investors should be on alert for buying opportunities. However, many investors wait for the dip and try to time the market. If investors could time the market everyone would be billionaires. The bottom line is that economic crises and market recessions happen — just be prepared and make the most of the opportunity.

The market was down for the second consecutive week after a promising start. Russia-Ukraine tensions take the spotlight on the world stage and threaten to derail a major part of the world economy. With economic recessions and market setbacks at the forefront of everyone’s mind, perhaps now is the time to search for investments to make.