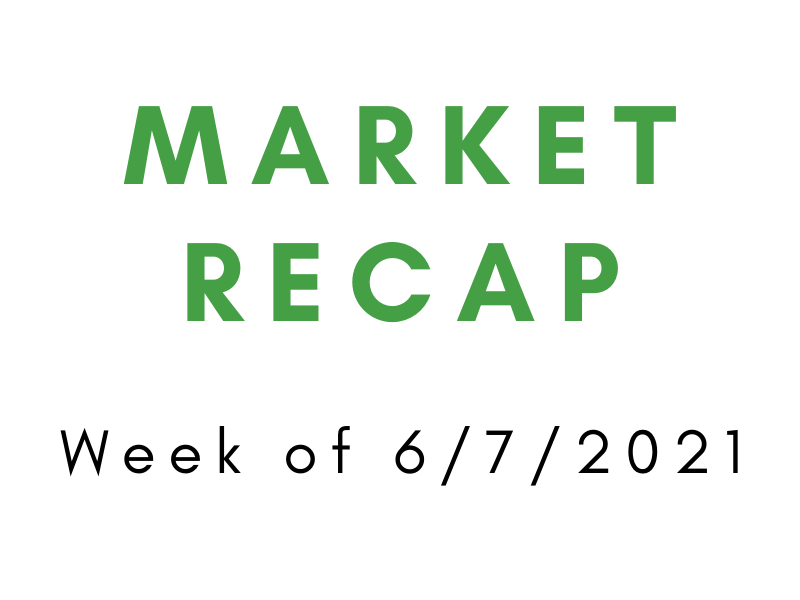 1. The Market is in Bulking Season

Investors shrugged off soaring inflation to avoid a negative week as the S&P 500 and Nasdaq rose. The S&P 500 seems to be in bulking season, gaining 0.4% this week to an all-time high after reaching all-time highs in prior weeks. The Nasdaq rose 1.9% while the Dow Jones lost 0.8% following a late-week recovery. As the weather heats up entering the summer season, inflation is heating up as well.

The Consumer Price Index is up 5% from last year, with inflation in consumer goods such as food and energy startling investors. Despite many metrics similar to CPI showing inflation is on the rise, government bond yields fell to a recent low this week. Unlike Elon Musk die-hards that go all-in on his every tweet, investors seem to be disregarding inflation as an issue and rather an inevitable symptom of the recovering economy that will eventually subside.

In the 70s, like a freight train with broken brakes, economic recovery spawned runaway inflation as rates rose to nearly 20%. Unlike then, it is highly unlikely inflation will rapidly increase as consumer demand is the primary fuel for inflation’s rise. What has been silently rising, without the same media attention as the first time, are the Reddit-WSB-“Meme” stocks. CLOV (Clover Health) rose almost 200% this week at one point as most other healthcare stocks fell this past week. BB (Blackberry) and AMC have continued to rise as risk-seeking “meme” stock day traders keep hitting the buy button with no hesitation.

If you’ve been following the market for the past few months and haven’t heard of Cathie Wood, you’re likely living under a rock. As the CEO and CIO of Ark Invest, she made headlines for earning outstanding annual returns by investing in cutting-edge tech stocks. In 2020, her ETF reported a staggering 170% return. Like Steph Curry’s impact in the NBA with his perfection of 3-point shooting, Woods made headlines for becoming the face of the belief in bets on the long shots with the biggest innovative potential. She believes that disruptive innovations can be hugely undervalued and perform significantly in the future.

Even though her returns have been limited by recent down-swings in high-growth stocks, Woods believes it’s an optimal time to reinvest in the market and invest in industries with high potential. It’s no secret that Cathie took advantage of the pandemic recovery and was able to reap such high rewards by targeting entertainment and tech. However, pandemic-like events don’t happen very often, and this will likely bring her ETF’s growth down to a more realistic number. Regardless, individual investors and firms alike hold much hope for Wood’s future as with one phone call, and a ton of paperwork, her decision to buy a stock can send it “to the moon”.

If you’ve been investing in the market for a long time, you might notice that your bullish positions might not do so well in June. Like Harden and Paul George in the playoffs, the market is usually weak in June. The Dow Jones has only been positive 52% of the time in this month historically, creating the saying “Sell in May and go away”. In the last 20 years, June has been an even worse month with positive, marginal gains occurring only 40% of the time.

This year, the market could be in for a rollercoaster ride as the Fed meets on June 15-16. With inflation rising, any decision or lack of a decision by the Fed will likely make this meeting the most important event of the month. If inflation rises over 2%, the Fed will most likely become the grim reaper of the market and make fiscal changes that will derail bullish progression. Heading into this less than a friendly month, Marc Chandler, the chief market strategist at Bannockburn Global Forex, believes that the dollar is weak, and if yields start rising, stocks could be at risk.

Another thing to note is just like practicing drills translates to gametime skills, the market’s performance in June usually indicates its success in its worst month: September.

This past week was choppy but ultimately positive with investors pushing aside inflation fears. June’s past poor performance has given rise to the saying “sell in May and go away”. The market frequently underperforms in June, and with inflation on the rise, a poor performance could ensue. Cathie Woods, an investor whose bets on high-growth tech stocks made her popular with risk-seeking traders and investors, has staggering returns during the pandemic, but performance has been volatile and falling in 2021.