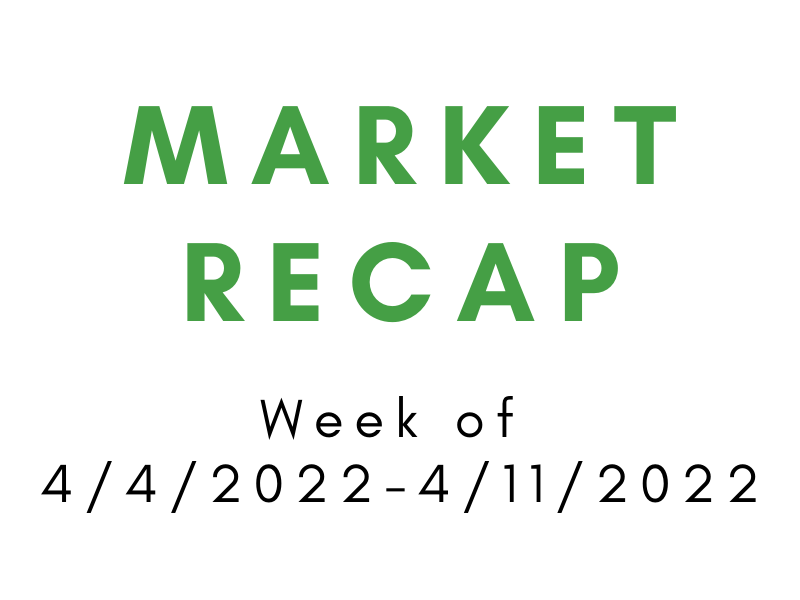 The last two weeks are summarized in three headlines.

The market flew too high this week and stalled, giving back some of the gains it recorded in March. The S&P 500 dropped 2.1%, the NASDAQ fell around 2.6%, and the Dow Jones slid 0.78% to cap off a down week. The prices of government bonds continue to rise as the 10-year bond now has a yield rate of 2.827%. The rising rates indicate investors believe interest rates will rise soon — a reasonable conclusion as the Fed Reserve indicates exactly this will occur.

If you haven’t already noticed, the market drops are prominently affecting the NASDAQ. The tech-heavy index has recently been suffering due to predictions of rising interest rates. This increase in rates hurts tech stocks especially as they are valued by their possible future performance (this performance being hampered by rising rates). In a wild turnaround from its peaks in COVID, the number of unemployment claims is down to 166,000, a level that hasn’t been seen since 1968.

The consumer price index showed an inflation rate of 8.5%, the highest it’s been since 1981. Tech stocks have taken a major hit as a result. Unfortunately for customers looking to fill up their tanks, the price of oil is back over $100. Customers are really hurting in this market, especially if they’re looking to upgrade their homes. The retail market continues to gain, increasing by a modest 0.5% in March.

Cathie Woods, known for her high-risk, high-reward investing strategy and her ARK Invest Fund stated that crypto might pose a serious problem for banks. “Cryptocurrency was initially created to sidestep old institutions – and banks may finally be feeling disrupted,” Cathie said. She told interviewers that more and more investors are looking into DeFi or decentralized finance.

These DeFi applications could threaten the world of banking and many major establishments. “Banks have a big problem,” Woods stated at a conference. She claimed that large banking institutions are losing talent to DeFi and thus are raising wages to stay competitive. The primary reason why is by utilizing blockchain and other novel innovations, a greater share of money is now being saved and lent on DeFi rather than through banks.

Adding fuel to the fire, Woods believes that “political institutions are part of the establishment positively responding to cryptocurrency.” What will happen in the future is always uncertain, but regarding bitcoin, Woods believes that its price will see the 7-figure mark as early as 2030. We’ll have to wait and see if she’s right.

As inflation booms, the common thought would be that it would impact the low-class and middle-class consumers only. However, as inflation rises, high-income customers have now started to dial back their spending. The situation customers found themselves in wasn’t a surprise: as the COVID stimulus dwindled and prices increased, spending had to be reduced.

Not to sound like Steve Harvey, but surveys show Americans have cut back on travel spending, luxuries, eating out, cars, and other goods. With around 3 out of every 5 Americans living paycheck-to-paycheck, these times can be precarious.

As the price of common goods like milk and bread increases due to inflation and geopolitical conflict, Americans are minding their wallets more carefully. The Americans on the other side of the spectrum making 6-figures have also started to cut back on spending. This is where the economy will take a hit as these Americans make up ⅓ of total spending.

When spending decreases, economic growth slows and prices, usually, fall back down to meet demand. What will happen when the Fed Reserve increases interest rates is uncertain, but they hope that it will prevent inflation from increasing.

The market fell back down this week giving up some previous gains. As more and more people consider using cryptocurrency for financial transactions, banks may lose a few customers. Customers are spending less and less as inflation rises.