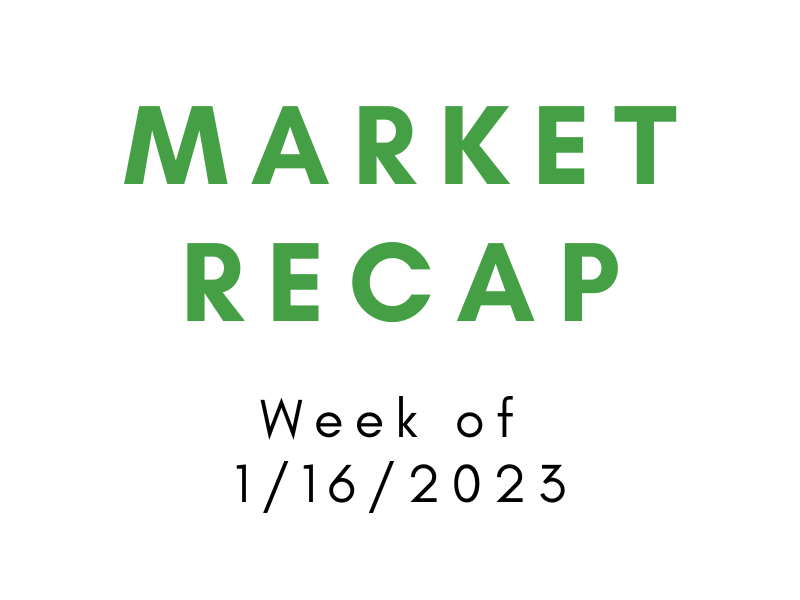 1. First Negatives of the Year

The S&P 500 and Dow Jones both suffered losses on the week while the NASDAQ managed to push out a small gain. The Dow Jones declined the most, with a loss of 2.7%, while the S&P 500 lost 0.6% and the NASDAQ gained 0.6%. Analysts also lowered their expectations for 2023 earnings as year-over-year growth predictions are now declines. Reversing a trend from last year, large-cap growth stocks have been outperforming their equity counterparts in 2023. Over the last two weeks, growth stocks have added 4.1% more in value than their value equivalents. With a lack of partisanship, the Treasury Department had to step into government proceedings and take special measures preventing a potential US default. The peak month for holiday shopping, December, didn’t seem to be a catalyst for the US economy, as metrics show spending in December fell at a higher than expected rate.

According to Daniel Lacalle, author and chief economist at Tressis Gestion, the global economy likely faces a decade of sluggish growth. The world has been grappling with various shocks, such as Russia’s invasion of Ukraine and China’s persistent zero-Covid measures, that have led to inflation rising and activity weakening. The International Monetary Fund projects that global GDP growth will slow from 6% in 2021 to 3.2% in 2022 and 2.7% in 2023, which is the weakest growth profile since 2001, except for the global financial crisis and the acute phase of the Covid-19 pandemic. Furthermore, global inflation is forecast to rise from 4.7% in 2021 to 8.8% this year, before declining to 6.5% in 2023 and to 4.1% by 2024, remaining above the target levels for many major central banks. Lacalle suggests that this boost will not bring growth levels close to where they were before the pandemic for a while to come, and that developed economies will be lucky to achieve 1% growth per annum. He also highlights the Chinese economy which is essential not just for the growth of the rest of the world but particularly for Latin America and also for Africa. Additionally, he emphasizes that there is not a crisis on the horizon but the markets are pricing in an environment where growth and economic development are not buoyant.

The United States hit its debt limit on Thursday, and the Treasury Department began using a series of accounting maneuvers to ensure the federal government can keep paying its bills ahead of what’s expected to be a protracted fight over whether to increase the borrowing cap. In a letter to Congress, Treasury Secretary Janet L. Yellen said the government would begin using what is known as extraordinary measures to prevent the nation from breaching its statutory debt limit and asked lawmakers to raise or suspend the cap so that the government could continue meeting its financial obligations. The milestone of reaching the $31.4 trillion debt cap is a product of decades of tax cuts and increased government spending by both Republicans and Democrats. But at a moment of heightened partisanship and divided government, it is also a warning of the entrenched battles that are set to dominate Washington, and that could end in economic shock. Treasury officials estimate the measures that they began using on Thursday will enable the government to keep paying federal workers, Medicare providers, investors who hold U.S. debt and other recipients of federal money at least until early June.

The stock market took its first steps backward this year, with subpar weeks for all major indexes. Daniel Lacalle, an economic analyst believes that the world might go into a decade of slow economic growth. The US hit its debt limit this Thursday, but special measures will allow the government to continue its normal operation.