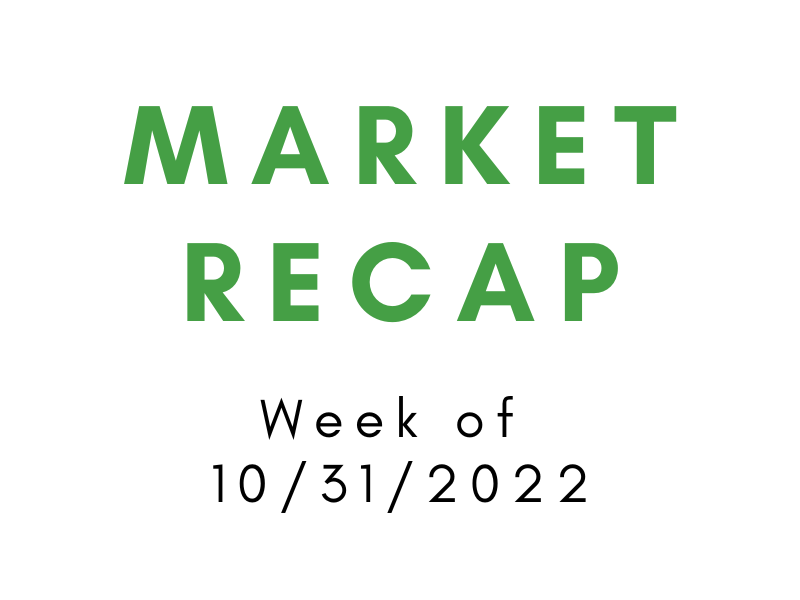 The markets reversed course this week to the dismay of investors, as all three major US indexes took a tumble. The NASDAQ took the worst hit of all, dropping nearly 6% on the week while the NASDAQ fell 3% and the Dow Jones dropped a modest 1% on the week.

Despite the risk of a recession and many consumers cutting back on spending due to rising costs, the labor market of the US continued to expand. The economy generated 261,000 new jobs in October, exceeding most analysts’ expectations as forecasts were set at around 200,000.

As investors expected, the Federal Reserve increased its benchmark interest rates by around ¾ of a percent, the fourth time in a row such a steep hike was approved. At its next December meeting, the Fed issued a statement saying they would consider the magnitude of the rate hike, staying at ¾ of a point or falling back to ½ a percentage point.

Earnings haven’t been equal for companies across the board. While many S&P 500 companies are reporting declines in profit, energy companies have been surging ridiculously to the tune of a 139% increase in earnings. The Consumer Price Index released on Thursday will show if inflation remains elevated like last month, or cooled down due to the Fed’s efforts.

End of an Era

Tech and retail companies had an incredible run during COVID, with seemingly endless profit and earnings that didn’t stop growing. It seems as if the historic run is over, as inflation, rising prices, and other environmental factors have slowed down growth.

The S&P 500 is now projected to show a year-over-year decline in the fourth quarter, the first time it’s been that way in the holiday season since the pandemic began. This would break an eighth-quarter string of pandemic earnings gains.

With disappointing earnings results for many significant companies this quarter, holiday forecasts have only gotten worse and worse. As inflation eats heavily into consumer spending, the holiday season when consumers normally splurge on gifts, food, and decorations might not be picture-perfect for retail companies and their profits.

Midterm Elections and the Market

With the upcoming Tuesday marking election day, investors are keeping a keen eye on the outcomes of the midterm elections. With enough seats at stake in this election, Wall Street could be majorly impacted. For example, if the Republicans seize control of the House, tax hikes are likely to be removed.

On the other hand, a Republican majority might lead to more spending on defense, meaning companies like Lockheed Martin and other defense contracting companies could receive billion-dollar contracts — a great sign to see if you have their stock. Overall, if different parties control the Senate and House, gridlock could occur. This inability of legislators is something the market loves, as limiting the number of new legislators upholds the status quo. With consistent laws, consistent gains are likely to be made.

The market tumbled again, unable to maintain the positive moment from last week. This comes at a time when earning’s results continue to disappoint. However, with the upcoming midterm elections, new political majorities could spell disaster or fortune for the future market.