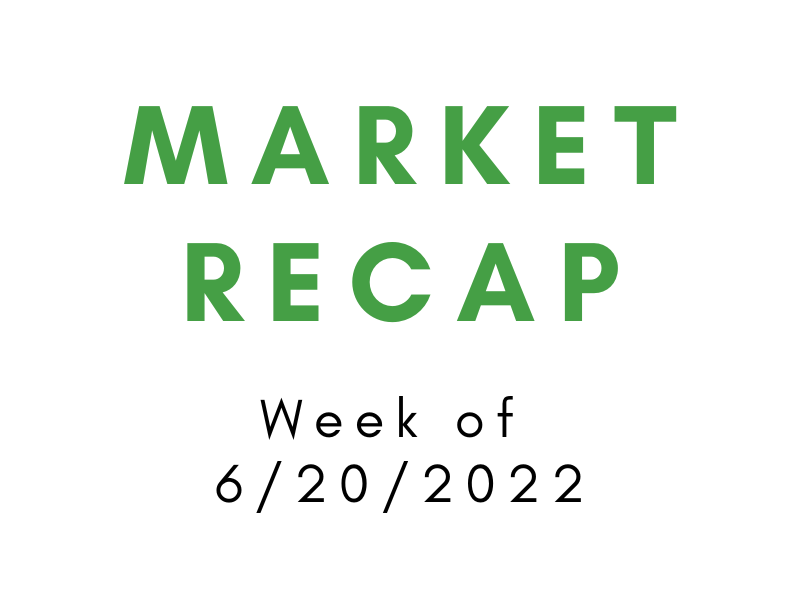 1. Markets Got the Rebound

After a prolific decline that put the S&P 500 and NASDAQ in correction territory, the market turned around this past week. The NASDAQ exploded with a gain of 7% while the S&P 500 and Dow Jones weren’t too far behind. This still puts the year to date declines for the S&P 500 at 18% and the NASDAQ at 26%.

The market switched directions from a week ago, when its losses had investors biting their nails in anxiety. US Treasury yields fell for the second week in a row, a sight for investors’ sore eyes as it signals fewer people are taking money out of the market.

For those whose school or jobs require them to drive, the price of oil is still sky-high. However, due to fears of a recession, the price of crude oil has been dropping as of late. The positive signs end there, as many indicators of economic growth are showing a slowing down in the past month. The volatility Bitcoin faced in the last month came to a standstill this week, as it traded between $21,000 and $23,000 on the week.

After a long losing streak, the past week was a surprising one for investors and left many wondering what changed. A University of Michigan sentiment survey showed that inflation expectations lowered this past week, aiding the market’s recovery. Additionally, James Bullard, the St. Louis Federal Reserve President said recession fears were overblown and consumer spending was still a strong point, adding to investors’ late game comeback after being blown out by a bear market.

Furthermore, the Federal Reserve’s stress test showed that banks were strong enough to resist a recession, giving investors confidence in the economy. The recent buyback also can be attributed in part to investors buying deeply discounted stocks and boosting the market. Some statistical measures also show that inflation might be peaking, rallying investors to invest back into stocks.

3. The Fall of Bitcoin

The fall of bitcoin has lost investors hundreds of billions of dollars as the market cap of the cryptocurrency as a whole dipped under $1 trillion. Though the price was stable last week, it’s a far cry from its peak of over $60,000 just a few months ago.

In the new year, investors have shown to be very risk-averse. To start, the Federal Reserve has increased interest rates. This hurts the demand for growth companies and speculative assets, including tech companies and cryptocurrency.  Until recently, Bitcoin was considered an asset resistant to changes in economic conditions, but that’s shown to be untrue. Like stocks and commodities, Bitcoin now follows larger economic patterns, and spoiler alert, the market, and economy haven’t been doing so great the past months.

The market rebounded this week, reclaiming some of the gains that it lost in the past few weeks. Investors that lost hope for the market might be regaining their spark again as it looks like inflation metrics might be cooling down in the short term. Bitcoin, usually highly volatile, has settled down just above $20,000, far from its high of nearly $70,000.