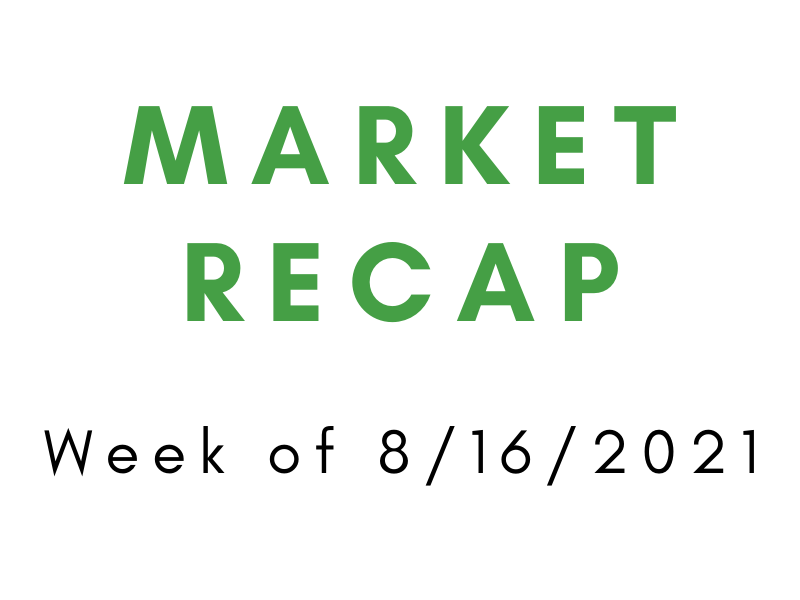 1. A Small Step Back

Despite all three major indexes gaining on Friday, the market took a step back this week and finished on the decline. The S&P 500 finished down 0.5%, the Nasdaq down 0.7%, and the Dow Jones down an entire percentage point. Despite record-breaking earnings, COVID fears and energy producers weighed down the progress of investors. While the market fell, so did the price of government bonds with yields falling to 1.26% for the week.

Oil investors wish the resource was more like Kanye’s new album, but unlike Donda, the price of oil continues to drop. The Fed minutes also dropped to the public, revealing a consensus to start reducing stimulus before the end of the year. Most investors don’t expect a redo of the 2013 Taper Tantrum, where the market dropped 5.7% in response to the mention of Fed tapering. Though this taper won’t significantly affect the market directly, it will make the market more susceptible to negative news and anxiety about economic growth, policy changes, and geopolitical issues similar to those in Afghanistan now.

2. Cathie Woods Against the Market Bubble

Ark Investment’s Cathie Wood defended her ETF and innovation-focused strategies after Michael Burry bet against her stock. Burry’s Scion Management is infamous for its hedge against the housing market in 2008. This bet against the market has been the source of many talks and arguably one of the most famous investing movies of all time: The Big Short.

Woods believes that the market isn’t in a bubble, despite what many bearish investors think. “In a bubble, and I remember the late ‘90s, our strategies would have been cheered on. We have nothing like that right now.” Woods cited the downfall of many IPOs and SPACs as a sign disproving the notion that the tech/growth market is in a bubble.

Overall, the SPAC and IPO market has deflated the past year with new companies now regularly losing value from their opening price. Woods believes that her fund is set up well for the future as her research is centered around DNA sequencing, robotics, energy storage, AI, and blockchain technology. These fields are “barely off the ground” and have lots of room to grow.

3. Chaos in Afghanistan On A Goldmine

If you’ve recently turned on the news, videos of people fleeing the Taliban takeover of Afghanistan are probably at the top of your page. With the decision to withdraw US troops outside of Afghanistan, the swift fall of the capital of Kabul to Taliban fighters has triggered a humanitarian crisis. It’s also brought increased attention to the gold mine the Taliban are sitting on.

With 90% of Afghans living on less than $2 per day, it’s clear that Afghanistan is stricken with poverty. With political instability, creating a hospitable and safe business environment is near impossible. However, the untapped potential sitting under homes in Afghanistan could prove promising for the developing country and could be essential for the world. In the ground, there are significant deposits of iron, copper, and gold as well as rare earth minerals including the all-important lithium.

Lithium is essential for rechargeable batteries and other technology vital for tackling the climate crisis. China, the next-door neighbor, is reportedly interested in the mineral deposits and might engage despite the chaos. Some experts even believe that with its resources, Afghanistan could become one of the richest countries in the area and rival the lithium output of Bolivia.

With energy and COVID concerns the market tools a step back this week amidst the Fed deciding to taper stimulus and bond buybacks. Michael Burry of the “Big Short” has bet against Cathie Wood’s Ark ETF. Wood responds by claiming that the market isn’t in a bubble and her fund is aptly set up for the future. While Afghanistan crumbles as the Taliban take over the country, the ground beneath is rich with precious minerals and metals that the world needs.