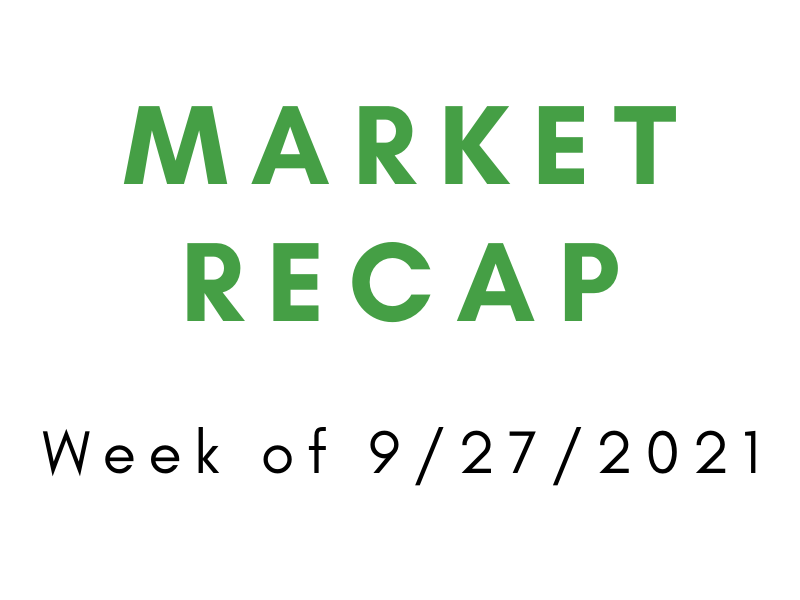 During an unsettling week in the market, the tech-heavy NASDAQ dropped more than 3%, the S&P 500 dropped more than 2%, and the Dow Jones dropped more than 1%. This down week marked the snap of the seven-month positive streak the market has experienced after recovering from the pandemic. Though we had a September Setback, analysts are optimistic heading into earnings seasons as it opens in mid-October.

However, though estimates are still good, analysts trimmed down their expectations during September. With the September Jobs Report ahead, investors will be able to see if August’s slowdown continued, or if the Delta Variant’s effect on job production has diminished.

In other news, oil eclipsed its high of $75 it set in July and almost reached a high of $76 per barrel on Friday.

The Kardashians and political gridlock are more similar than you’d expect: they both always find a way to wiggle themselves onto your TV and make no significant impact on the market. With lawmakers in Washington arguing about the debt ceiling and another government shutdown looming, many investors wonder how the market will perform. If the past 18 government shutdowns demonstrate anything, the market will usually not react positively or negatively to a market shutdown.

To the surprise of many investors, the market will be positive the week after a shutdown 60% of the time. However, the 40% of down weeks after shutdowns won’t have to be experienced in the upcoming week as a deal was made. Investors caught their breath as Biden announced that the government shutdown would be avoided as the bill would fund the government until December 3rd.

However, the growing debt concerns some politicians as they warn a default would be catastrophic. The US Government, which has never defaulted in its storied history, will try its best to prevent a default as many experts believe it will raise the unemployment rate to 9% and wipe out a third of the market’s value. The US is the backbone of the world economy and defaulting would be like Kanye releasing an album on time — simply unheard of.

In times of prosperity or despair in the market, investors get jealous. Like a jealous friend or an envious partner, investors get suspicious of other traders, especially those who experience success. Some investors try to get ahead of the competition by using confidential information to influence their stock picks. As appealing as this sounds, unfortunately for many investors, it’s also illegal. This is known as insider trading and is one of the best ways for the SEC (not college football), or the Securities and Exchange Commission, to send you to jail.

Even with insider trading rules, purchases made by top U.S. executives outpace the S&P 500 by 5%. This gap might seem unfair to average traders without insider knowledge of top companies, but on Wall Street, it’s an unwritten rule of sorts that insiders trade on what they know, and without substantial proof, it’s very hard to prove wrongdoing.

A group of quants published a paper that found that by mirroring insider’s trades over a year, their portfolios will on average be 23% better than average. This significant margin can’t be because of better judgment of public information, but simply due to knowing information not available to the public. After all, top execs will know their company’s performance better than the average bystander. Many investors think the market is rigged, and they just might be right.

An unsettling week finishes out the first down month the market has experienced in 7 months. With a government shutdown just barely being avoided, how has the market been affected in the past? Insider trading is illegal, but hard to enforce, and one paper shows just how much of an advantage insiders have.