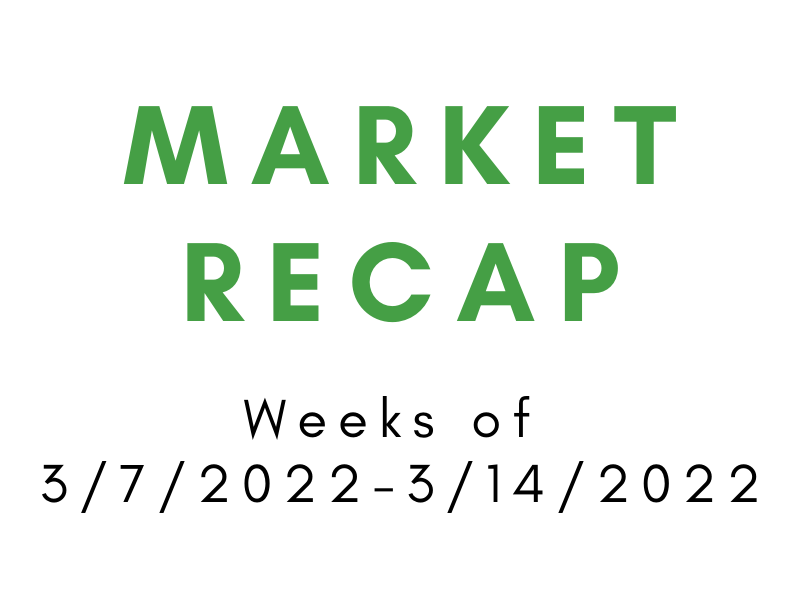 1. Losing Grip and then Finding It Again

In the week beginning on 3/7/2022, the market continued to lose traction as it declined for the fourth week straight. All major indexes dropped significantly with the S&P 500 and Nasdaq dropping around 3% and the Dow Jones around 2% on the week. The war in Ukraine has continued to drive markets and even a strong rally on the hump days wasn’t enough to turn this week positive.

Oil went for an absolute ride this week, up and down like a rollercoaster as it surged past $130 a barrel and then dropped to finish just under $110 on Friday. This is still ridiculously high as oil was $66 a barrel a month ago. This week, the NASDAQ officially went into bear market territory as its down more than 20% from its recent highs set back in November.

Not assisting the fight to turn the markets green, inflation ballooned in February as the government reported an inflation rate of 7.9%. Though our wallets might’ve been hurting, the price of precious metals was not. The supply-chain insecurities caused by the ongoing tension in Ukraine caused the price of nickel to double on Tuesday and gold to surge to $2,072 an ounce.

In an incredible turnaround occurred this past week as all three major indexes made up the ground they had lost in the two weeks prior. The indexes gained 6-8% on the week in the strongest performance since November 2020. Unfortunately for investors, the stock market wasn’t the only thing that rose this week.

Yield rates surged to 2.15% amidst inflation and other monetary concerns. The Fed also raised interest rates by a quarter of a percent, and are expected to raise rates in each of their following meetings. Additionally, oil prices slid just barely staying above the $100 dollar mark on the week. As the Ukraine-Russia conflict continues to rage on, the price of oil will stay volatile.

In honor of Women’s History Month, let’s take a small peek into one of the most influential women investors and pioneers of her time. Muriel Siebert, without ever going to college, found an entry-level finance research positive. Working hard against pressures to quit from her male colleagues, she made partner and then founded her brokerage firm Muriel Siebert and Co.

After many tries and rejections from males heading the NYSE, she was able to get her firm registered by the New York Stock Exchange. Her company became the first-ever woman-owned member of the NYSE.

Siebert was also one of the first few to adopt discount brokering, where commissions weren’t so great and investing was less expensive and open to more people. Siebert kept pushing boundaries and expanded her roles politically. She was the first woman New York State Banking Department superintendent and helped prevent bank failures in a tumultuous time in the country’s economy.

Amazon has become the latest major tech company to split their stock. Their stockholders just approved a 20-1 stock split meaning that their stock will now be worth under $150 tentatively. This doesn’t mean that the value of Amazon increases, just that there are now 20 times more shares worth 20 times less.

The main purpose of a stock split is to make the stock more affordable for retail investors and encourage buying more stock. This would be the first Amazon stock split of the 2000s and the fourth split all-time for Amazon. This decision to split already helped the stock as it jumped up on the promising news.

What does this mean for people who already own the stock? This means that the number of shares they have is multiplied by 20. If you originally owned 1 share you’d now own 20.

The market continues to fall as inflation rises and the conflict in Ukraine scares investors. Muriel Siebert, a woman pushing the boundaries of her time in the financial world, making an impact far beyond her firm. Amazon’s stock is splitting, a classic attempt at making stocks more affordable for average investors