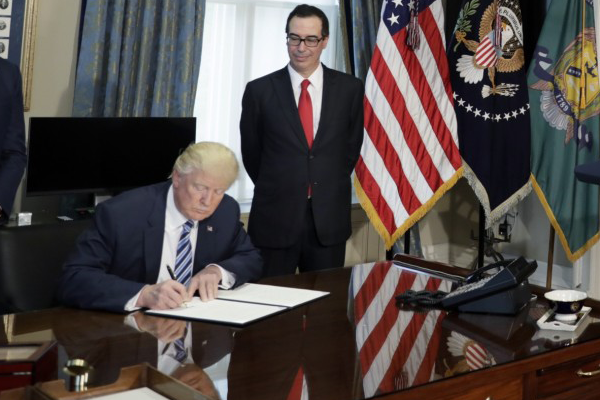 Throughout the Donald Trump presidential campaign, a common narrative that was pushed was to simplify the tax code. This plan included the narrowing of the income tax into four brackets. It also included changing the corporate tax rate to 15%, regardless of the size of the business. On Tuesday, September 12th, statements from Treasury Secretary Steven Mnuchin exhibit that the possibility of such a corporate tax cut may be bleak.

CNBC hosted conference on Tuesday with Mnuchin. There, Mnuchin stated that “given the budget issue,” he doesn’t know if 15% is achievable. He did, however, outline that a key goal of his term is to create more competition within the private sector.

Due to the failure of the proposed American Health Care Act (AHCA) this past May, as well as other efforts to “repeal and replace” the Affordable Care Act, as per the promise of President Trump, House and Senate Republicans have been anxious to score a successful vote, and the possibility of a compromise on the proposed tax reform bills appears very possible. The White House appears to be settling its negotiations with Congress for a rate of 23%. This is a significant increase from the proposed 15%.

With the current budget, involving a great increase in military spending, likely due to the events taking place with North Korea, a tax rate any lower than 23% seems implausible.

Steve Schwarzman, the CEO of Blackstone Group LP, projects that the corporate tax rate will be decided at “somewhere between 25 and 28 percent.”

Ever since the Trump presidency began in January, the Dow Jones Industrial Average has risen nearly 12 percent. This is likely due to optimism from investors in Trump’s goals to increase corporate freedom. It is unknown how a corporate tax rate in the mid-20s will affect the markets. Assuming the current trend continues, the possibility of a bear market is imminent.