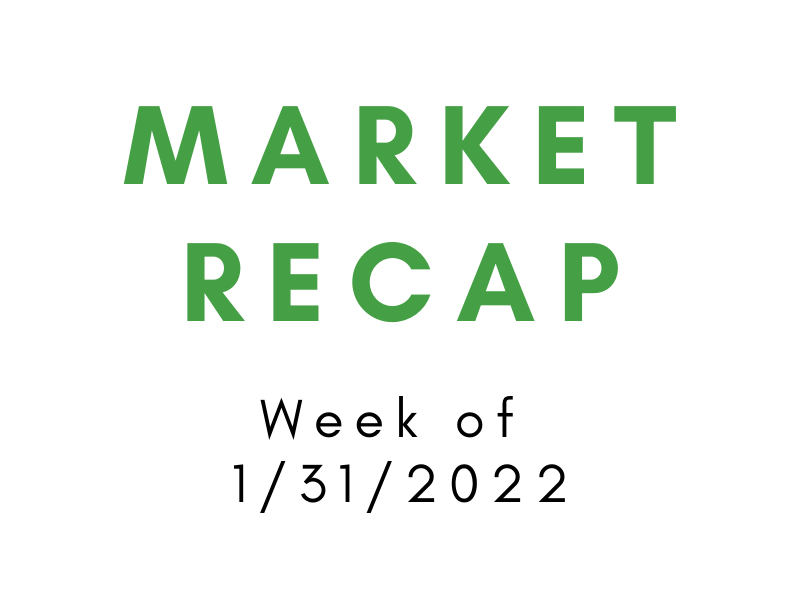 1. Turnaround as Earnings and Jobs Takeoff

2022 was brought in with three straight weekly declines, but the markets have turned things around. For the second week in a row, the major indexes posted an increase driven by positive job numbers and earnings reports. This week’s gains overshadowed the modest gains of the prior trading week with the Dow Jones and S&P 500 earning over a percent and the NASDAQ over two percent. From the disappointing December, the jobs market made a comeback producing 467,000 new jobs in January, exceeding the economy’s expectations by a significant margin.

The positive jobs report was taken heavily by government bond yields as they sent the 10-year U.S. Treasury Bond flying up to 1.92%, the highest it’s been since before the pandemic. Yields grew in other countries around the world as expectations of US monetary/fiscal policy tightening grew. Investors will hope the momentum stirred up by fourth-quarter earnings continues into next week as the 56% of companies that had reported earnings by Friday performed admirably.

If you’ve driven to your local gas station to find out that the prices are sky-high, it’s not just you. Around the US, consumers are meeting surprisingly high prices at the pump as the price of US crude oil rose to over $92 a barrel. In the past few weeks, the volatility of the market has been downright terrifying at times. The NASDAQ rollercoaster that ensued this week is a perfect example of this. On Monday, the index exploded up 3.4% and then tumbled 3.7% on Thursday to finish with a gain of 1.6% on Friday.

In the coming week, investors will be watching closely the inflation metrics which have been the driving force of the volatile market in 2022. Investors have been on edge over their beliefs about the Federal Reserve to take hawkish monetary policies to combat inflation. Rising inflation rates above nearly zero would hurt high-growth stocks significantly. These high-growth, rate-sensitive stocks have been hit hard this week, accounting for the NASDAQ’s extreme volatility and severe losses.

Brent Schutte, the chief investment strategist at Northwestern Mutual Wealth Management Company, believes “The Fed’s goal is not a recession.” He believes the tightening of current monetary policy will be more of a “fine-tuning” rather than what happened in the 80s. In 1980, under the leadership of newly appointed head Paul Volcker, the Federal Reserve limited inflation by adopting aggressive tightening policies with interest rates between 10-19%. He kept these policies in place while inflation was decreasing causing a recession but also “quickly reducing inflationary pressures.” As the costs of living in the pandemic go up, investors will pay increasing attention to shelter, energy, and wages. Overall, investors will be keeping a keen eye on the inflation readings and Fed Reserve movements as investors try and predict how the market will move.

3. Oil and the Reason Your Gas Bill is So High

Filling up your gallon is more pricey than ever, hurting consumers’ wallets around the country. A year ago, the national price of oil per gallon was $2.44. Now, the national average is rapidly approaching that same figure but a dollar higher. With the average at $3.40, the Biden Administration has been recorded saying they recognized the problem and were trying to reduce oil prices. In response to the rising prices, they released 50 million barrels of oil from the nation’s strategic reserve to relieve pressure on consumers, but the move didn’t make much of a difference.

Many energy analysts predict the price of oil could very soon touch $100 a barrel, even as the pandemic continues and electric vehicles are on the rise. There are several reasons for this price hike but none are as significant as the potential Russian invasion of Ukraine. In a market where the supply just keeps up with demand, any potential movement could send prices rocketing even higher. Russia produces 10 million barrels of oil a day, or 10% of the total supply used every day. Losing this oil supply wouldn’t hurt the US significantly as we could replace this oil from other nearby countries. However, much of northern Europe is dependent on this oil and would be severely harmed. This disruption in the global energy supply chain would cause even further shortages of oil and cause prices to increase even more.

The market had a positive week after meager gains and three straight weeks of losses. Inflation’s on the rise and the likelihood that the Fed Reserve will tighten monetary policy is extremely high. The price of crude oil and at the pump is continuing to go up due to Russia and supply shortages.