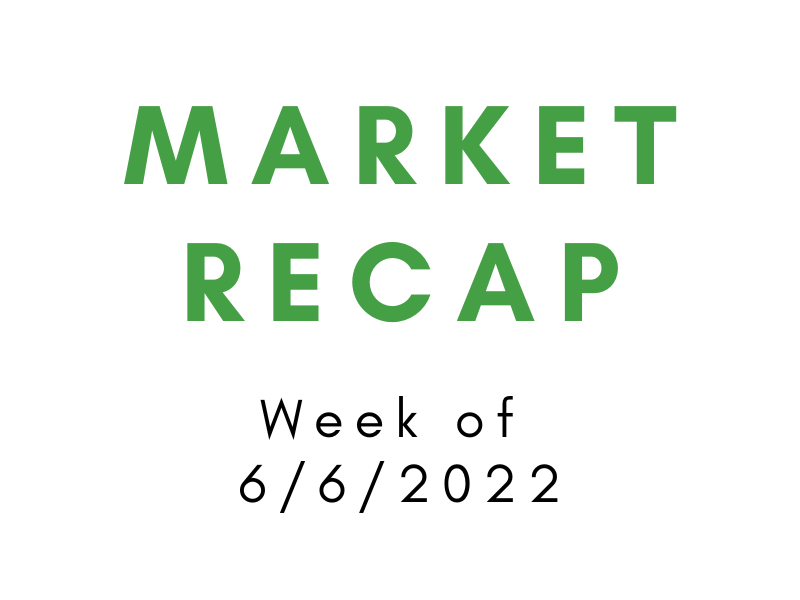 The market continued its descent on its recent death spiral, with all three major indexes posting major losses. The S&P 500 and NASDAQ dropped between 5-6% on the week, primarily on Friday when an inflation report was released showing its price increases were worse than expected. The Consumer Price Index showed a year-over-year price increase of 8.6% for the month of May. After Friday’s inflation report, bond yields skyrocketed over 3%, representing fears about rate increases.

Amid this high inflation, studies show investor confidence in the market is extremely low, with their consumer sentiment being at its lowest since the early 1970s. For historical context, the consumer sentiment in the present is comparable to its levels in the Vietnam War. Throughout all this inflation, volatility continues to rise as market swings are frequent.

Next week’s Fed meeting could spell more doom for bullish investors as many economists believe that another half-point interest rate increase will be instituted. With inflation running wild, the Fed hopes to contain the rising price levels but may hurt the market and investors’ portfolios as a result.

Everyone knows that rising interest rates are the Fed Reserve’s chosen method of containing inflation, but why exactly does this help? Increasing interest rates is a way of tightening monetary policy, or a tool used to restrain rising costs coming from an overstimulated economy.

To understand how interest rates affect inflation, consider inflation as an imbalance of supply and demand. With supply low and demand high, prices are bound to rise. By raising interest rates, the Fed makes it more difficult to borrow money, affecting other parts of the market. Due to borrowing becoming more difficult, less money is present in the market to buy items, and consumer spending decreases as a result. Demand in general decreases when spending is cut down, so prices go back down as well.

In practice, it works perfectly, but with less consumer expenditure, the economy takes a hit as companies don’t earn as much. Either way, if interest rates continue to rise at their pace, the economy would be less stimulated.

Most have noticed that the tech-heavy NASDAQ index, generally representing the average performance of tech companies, has been hit hard. Rising interest rates and inflation especially hurts these sectors of the market. In particular, these tech stocks are commonly viewed as “growth stocks” whose value is heavily dependent on their future worth.

With their high P/E ratios and low dividend yields, inflation hurts the valuations of the stock. Higher rates stunt the growth of these companies as they have less money to re-invest into their personal growth. Additionally, investors, in general, don’t like losing money. So in times of volatility and uncertainty, investors take their money out of growth stocks and put it into more stable companies. Growth stocks are also valued based on what they could earn in the future. With rising interest rates and less profit, investors are less confident in earnings in the future so these stock values decrease. Overall, tech investors view rising interest rates as hurdle to returns.

The market continues to spiral out of control as inflation worries investors. The Federal Reserve is combatting this rising inflation by raising interest rates, which may only restrain the market as consumer spending decreases. The Fed’s actions are leading to less favorable views on tech stocks than any other sector.