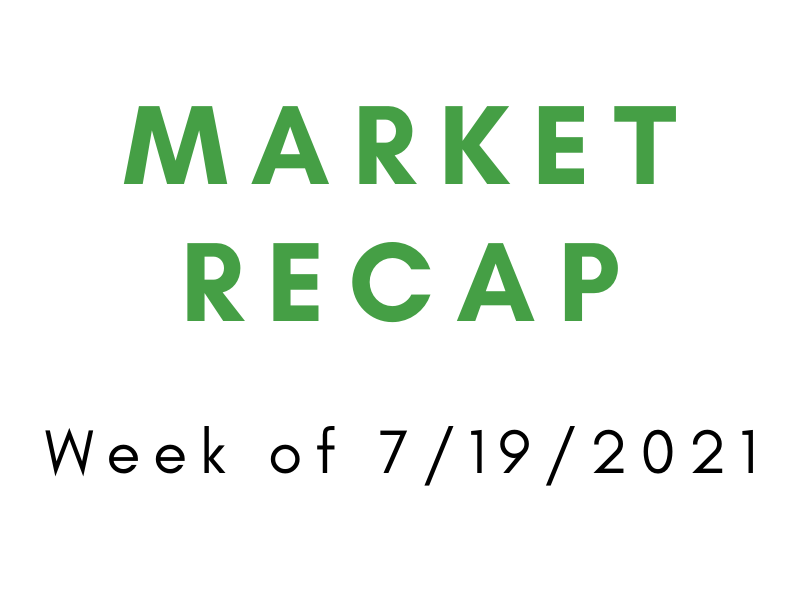 1. Bouncing Back from a Shaky Start

A whipsaw week resulted in the three major U.S. indexes bouncing back from last week’s small declines. The Dow Jones gained 1.1% on the week while the Nasdaq and S&P 500 gained 2.8% and 2.0% respectively. In the recent second-quarter earnings results, 88% of the S&P 500 companies reported their results that beat analyst estimates. Like the cherry on top for this all-around positive week for the market, yield rates have been sinking as bonds continue to rally. They plummeted on Monday to 1.19%, the lowest they’ve been in five years.

There is one spot of slight concern for some investors: unemployment numbers. This total rose to 419,000, higher than what economists expected but still following a general decline from the heights of the pandemic. As the Delta Variant stole the spotlight last week, its effects on the global economy are still being felt and worry some investors. Increased worries that the market and economy are overstimulated are also giving some investors market anxiety. Overall, when the Fed begins to discuss plans for reducing stimulus and changing rates, the market is likely to be very volatile (like the Suns performance in the finals).

The Chief Investment Officer of the Bryn Mawr Trust, a firm with over $19 Billion in Wealth Assets managed believes that the recent market upheaval is creating significant investment opportunities in cyclical and value stocks. Jeff Mills points to the Russell 1000, one of the US stock indexes tracking the top 1000 companies by market cap, to show that stocks in energy, materials, industrials, and small caps have been left for dead. 0% of energy names are above their 50-day moving average, he says.

Mills believes Big Tech’s bullish run the past two months is in response to the rapid decline of interest rates and that rising rates in the future will whip up major headwinds for tech. In a rising interest rate environment, characterized by economic rebound, energy and materials usually do well as their relative price increases significantly.

Last Monday, the market took a brief nosedive of 1-2% but bounced right off the upward sloping 50-day moving average line. Mills says that “the fact that we saw some strength after Monday right off that technical level makes me feel pretty good”. Overall, like vultures eating the leftovers of the market and thriving in desolate conditions, when the Fed plans to raise interest rates, Mills believes energy and small-cap stocks will lead the market.

The culmination of the commercial Space Race resulted in two, thrilling launches in the past two weeks from Virgin Galactic and Blue Origin. This race to commercialize space flight is pioneered by Richard Branson and Jeff Bezos — both billionaires I’m sure you’ve heard of. Both companies are trying to make space more accessible, cheaper, and profitable, but red ink is of no concern for these billionaires focused on reaching the heavens. The US Chamber of Commerce predicted that commercial space flight would be a $1.5 trillion industry in 20 years.

At this point, the rides are only truly possible for the ultrarich. However, both companies hope to make space flight possible for regular millionaires. The space industry is already booming with the government handing out contracts to space companies devoted to sustainable habitats and mining resources. As the difficulty of getting to space eases, commercial space flight, as well as extraterrestrial business and resources, will become accessible and grow — it’s just a question of when it will happen.

After bouncing back from a dismal Monday, the market recovered significantly and had a great week. Earnings season has proven to be historically good with most companies reporting better than expected results. Jeff Mills, an investment officer, believes cyclical and value stocks will begin growing after Big Tech optimism cools down. The space race has kicked off with successful space flights from Richard Branson’s Virgin Galactic and Jeff Bezos’ Blue Origin.

I am a freshman at TJHSST. I write about stocks and current events.