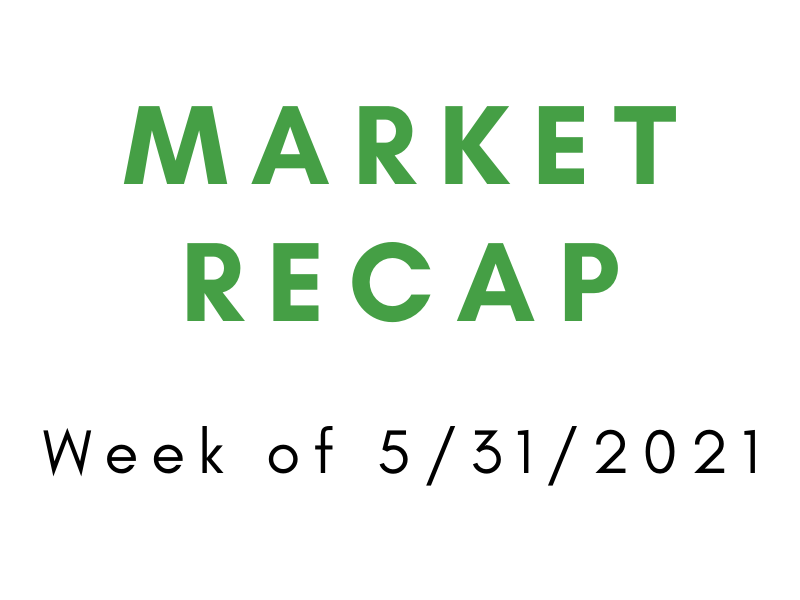 Investor expectations about inflation this were calmed as tech led the way to a steady week of gains for the indices. The Dow Jones and S&P 500 rose steadily with gains of .5% and .9% respectively, while the NASDAQ had an up-and-down week, ending with a gain of half a percent with lows of more than a 1% loss. Through lows on Thursday caused by inflation and yield rates spiking, the NASDAQ fought back and ended up in the positive. Whether or not the NASDAQ is headed for a knockout due to upcoming inflation is up for debate, but one thing is for sure: inflation is not down for the count just yet.

In May, 559,000 news jobs were added. Though this was short of the expectations, it was double the number the month before, showing significant progress of the labor market recovery. This strong growth is good news, but if the market continues to recover at an incredible rate, inflation and its consequences will likely return. In May, wages and consumer demand rose, keeping up with the rate of the production of jobs, leading many analysts to believe that the Federal Reserve won’t change any market-defining policies soon.

Warren Buffet once said that “We simply attempt to be fearful when others are greedy and to be greedy only when others are fearful”. Arguably the most successful and famous investor ever, Buffet essentially believes to buy when stocks are low, which is common sense. However, Buffett’s favorite measure of the stock market’s valuation — the so-called “Buffett Indicator” — is saying that cheap stocks may be few and far between.

The Buffet Indicator, Buffett’s favorite metric for how the market will perform, strongly suggests that the market is overvalued. The Buffett Indicator divides the total market cap of the stock market by the country’s GDP. Basically, it compares the stock market’s size to the economy’s size, as measured by GDP. The stock market’s size is driven by expectations about the future, and the Buffett Indicator, like all valuation indicators do at their core, measures whether expectations are exceeding or meeting reality.

According to this indicator, the market is more overvalued than it was during the dot-com boom from 1999-2001 before crashing. Though other metrics indicate that the market is overvalued, just like weather forecasters, they aren’t perfect at predicting the future. Don’t just go shorting the market based on these indications of overvaluation. Luck and timing have more to do with your successes — and your failures — in investing than you may think.

Crude oil is up to around $70 a barrel, spurred by OPEC cutting its production and the US’s ambiguity on the Iran Nuclear Deal. Oil went negative $30 during the pandemic as sellers were essentially paying buyers to take their oil in anticipation of significantly lessened demand for oil during the pandemic. It’s now back up, and during this price rise, many investors are considering the impact of electric cars on oil.

Already, Big Oil is flexing its muscles and lobbying hard to prevent the spread of electric vehicles, primarily through proposing anti-charging station laws. However, like death, taxes, and English teachers asking you to analyze random passages written a century ago, electric cars populating the streets is inevitable.

In a few years, scientists believe electric engines will be cheaper and more efficient than their combustion counterparts, making these cars more and more desirable. Global oil demand would drop, severely hurting companies in the Middle East and Russia, both of which have economies that are dependent on oil. Will the price of oil start dropping, or will new demand be created? Nobody knows, one thing is for certain: electric cars are the here to stay.

All three major indexes were up slightly this week as inflation took a backseat to promising job growth and positive investor expectations. The market continues to recover at a rapid rate with no Fed Policy changes in sight. Buffett’s favorite indicator says the market may be overvalued, but don’t take it at face value. As crude oil prices hit $70 a barrel from pandemic’s negative prices, the rise of electric cars may cause a more natural drop in demand in the future.